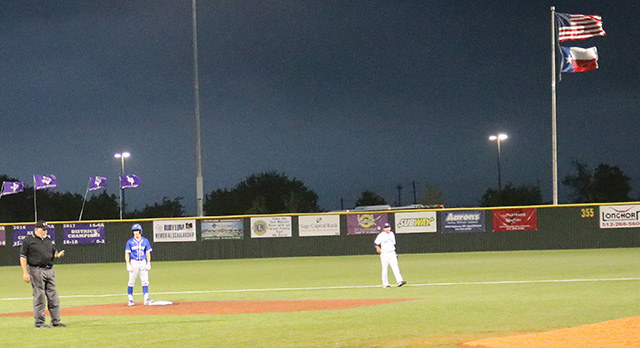 Trojans snatched the lead late in the game in a 4-2 victory over San Marcos Rattlers Varsity.

The original schedule had the Trojan-Rattler match up on Tuesday. That attempt went 3.5 innings before God’s electric light show that rumbled through central Texas ended the match.

The rematch game on Wednesday was scoreless with Trojans batting in the top of the fourth when Ben Caven’s sac fly scored one run for Trojans.

San Marcos Rattlers Varsity knotted the game up at one in the bottom of the sixth inning. Deleon hit into a fielder’s choice, scoring one run.

Ben Kurio (1.250 ERA) was the winning pitcher for Trojans. He lasted five innings, allowing two hits and zero runs while striking out five. Ben Caven threw two innings in relief out of the bullpen. Caven recorded the last six outs to earn the save for Trojans.

Pardo toed the rubber for San Marcos Rattlers Varsity. He allowed four hits and one run over five and a third innings, striking out three. Miranda and Richard Santellana entered the game as relief, throwing one inning and two-thirds of an inning respectively.

Andrew Mitchell went 2-for-3 at the plate to lead Trojans in hits. Trojans was sure-handed in the field and didn’t commit a single error.