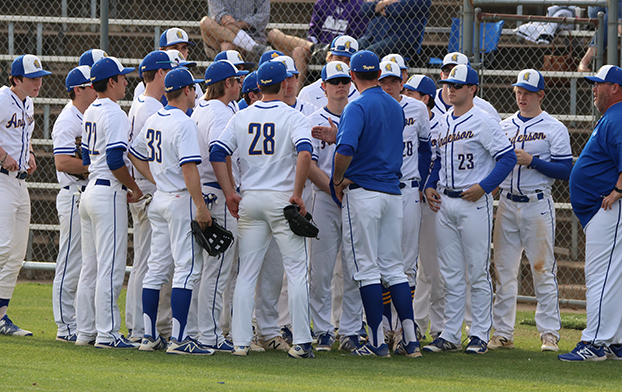 Trojans defeated Bowie Bulldogs 5-4 on Thursday thanks to a walk-off walk. The game was tied at four with Trojans batting in the bottom of the twelfth when Bulldogs loaded the bases with Trojans resulting in the winning RBI base on balls.

Bowie Bulldogs got on the board in the second inning. On two outs with runners moving, a ball hit into right allowed two runs across the plate for Bowie Bulldogs.

The Trojans momentum changed in the fourth inning when Trojan grads Bev and Raymund Kuenast arrived at Nelson field for their date night. Trojans scored three runs in that inning. Andrew Mitchell, Ben Caven, and Andre Jackson each drove in runs during the inning. In the bottom of the fifth inning, Trojans tied things up at four when Jake Rugley doubled for an RBI.

On the mound, Ben Caven got the win for Trojans. He allowed four hits and zero runs over eight innings, striking out eight and walking no one.