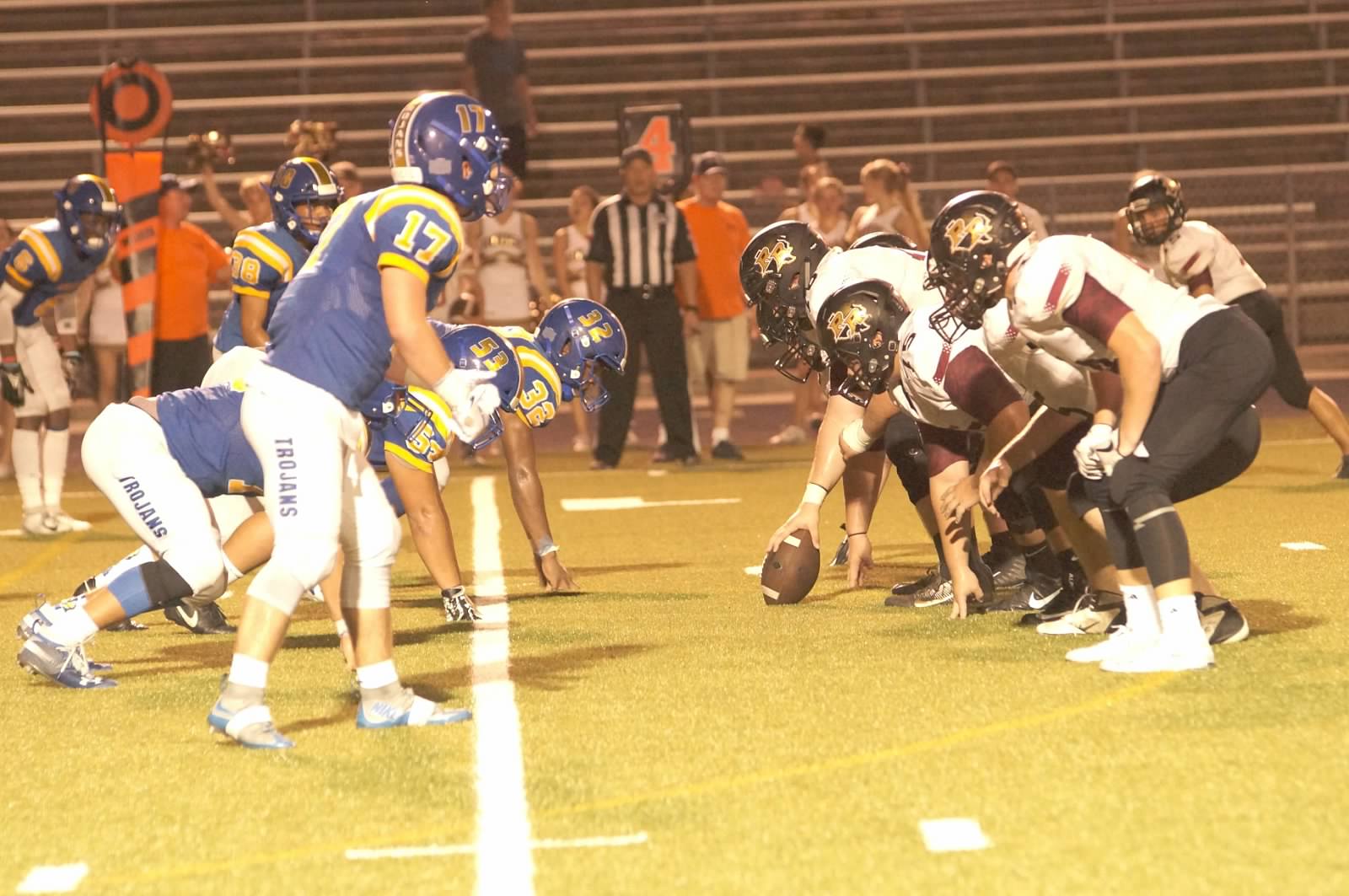 The Anderson Trojans squared off against the Rouse Raiders at Nelson Field on Friday the 7th in a game that went down to the last three seconds. The Anderson faithful were treated to a come from behind, five point victory for the second game of the season.

Anderson’s offense is the a ”Wing T”, designed to use a healthy dose of running and clock management. Starting the first quarter with the ball the fans were quickly strapped into the roller coaster when the first attempt at a punt was blocked.

The Defense was on their heels, Rouse reaching first and goal on the five, and the evening was looking rough, fore shadowing the position Anderson D was to find themselves in during the last series of the game. The defense played strong, forcing Rouse to go to fourth and goal for the one yard score.

On a subsequent drive, Anderson used the running back out of the backfield for a pass and a large 25 yard gain. The offense was looking good, but was held. This time the punt was solid, and the coverage converged to keep the return to a minimum. 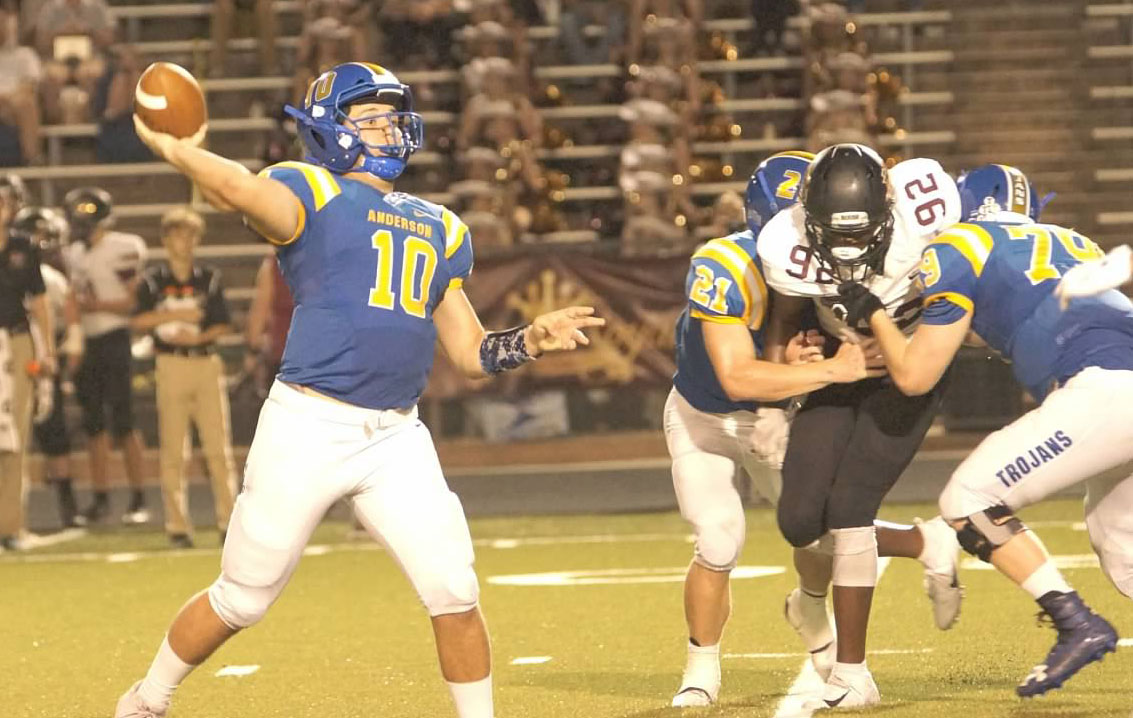 The first drive of the second quarter for Rouse saw them score. It was a bleak moment to be down by fourteen points.

The Trojans offense started to show some life when on the third play the running back shot up the middle of the defense, with a huge seventy yard run, sliding to the right sideline into the end zone. Scoring on that drive brought the fans to life.

The defense sprang into action against the Raiders, with the backfield snagging the first pass from scrimmage on the 45 yard line, from the left side of the field, and weaving forward and across the field to take possession of the ball in front of the fans at about the twelve yard line. 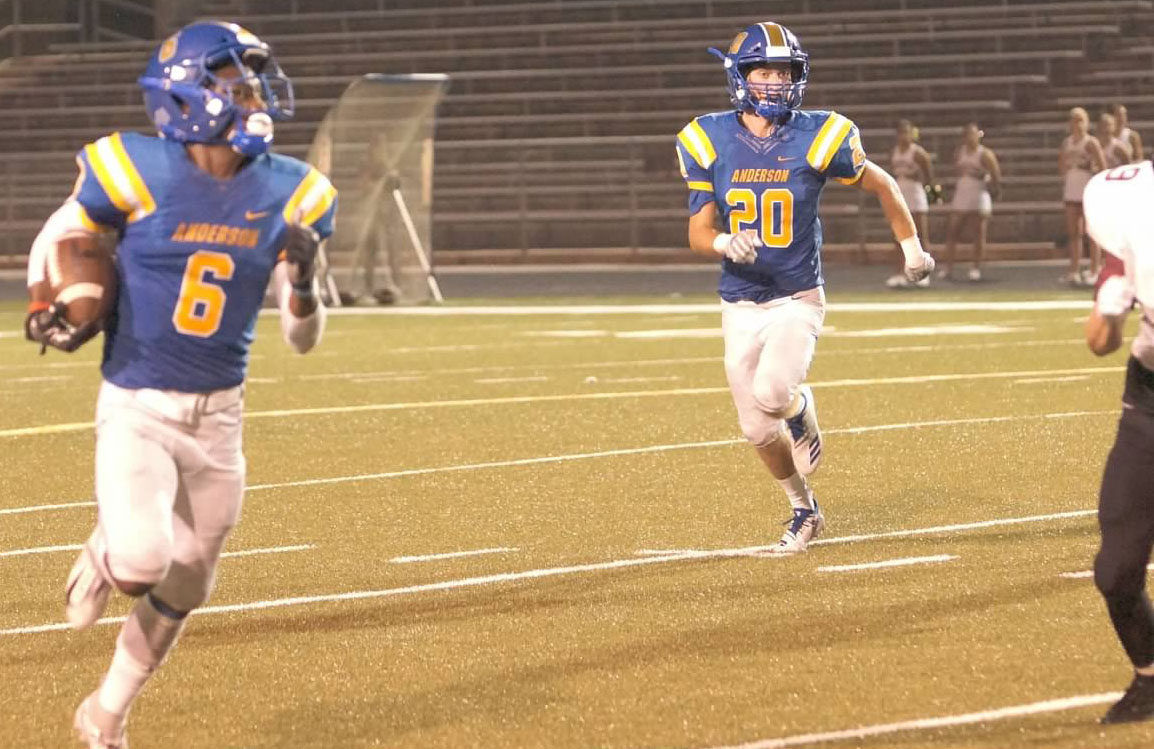 With first and goal at the ten a series of hard hitting runs, helped by a defensive penalty, lead to a solid run through the line for the touchdown. The extra point was missed, and the teams went into the locker room separated by one point, a familiar situation from the end of last weeks’ game.

Anderson started the second half kicking to the Raiders, a line drive down the middle of the field, taking an interesting spring, Rouse was not able to get on the ball, as it continued to bounce around, with Anderson recovering the ball on the 24 yard line.

A defensive holding call on third down found Anderson with first down deep in the red zone. Two runs, and the Wing T was in the end zone. The extra point was no good, but the five point lead was awesome.

Rouse took a page from the book of clock management and used a long drive to score and put themselves up. The defense came out of that score with a victory, when on the two point conversion attempt, with the quarterback running to the left, stopping the play behind the line. The score was back to a one point lead for the Raiders.

Throughout the game the Anderson Trojans used a steady diet of passing to go with the rushing game. The scoring drive to take the lead started in the third quarter, and was sparked with a great 30 yard pass on third down and then a 15 yard pass on the next third down. On the same drive, the first third down in the fourth quarter was converted with another 15 yard pass. 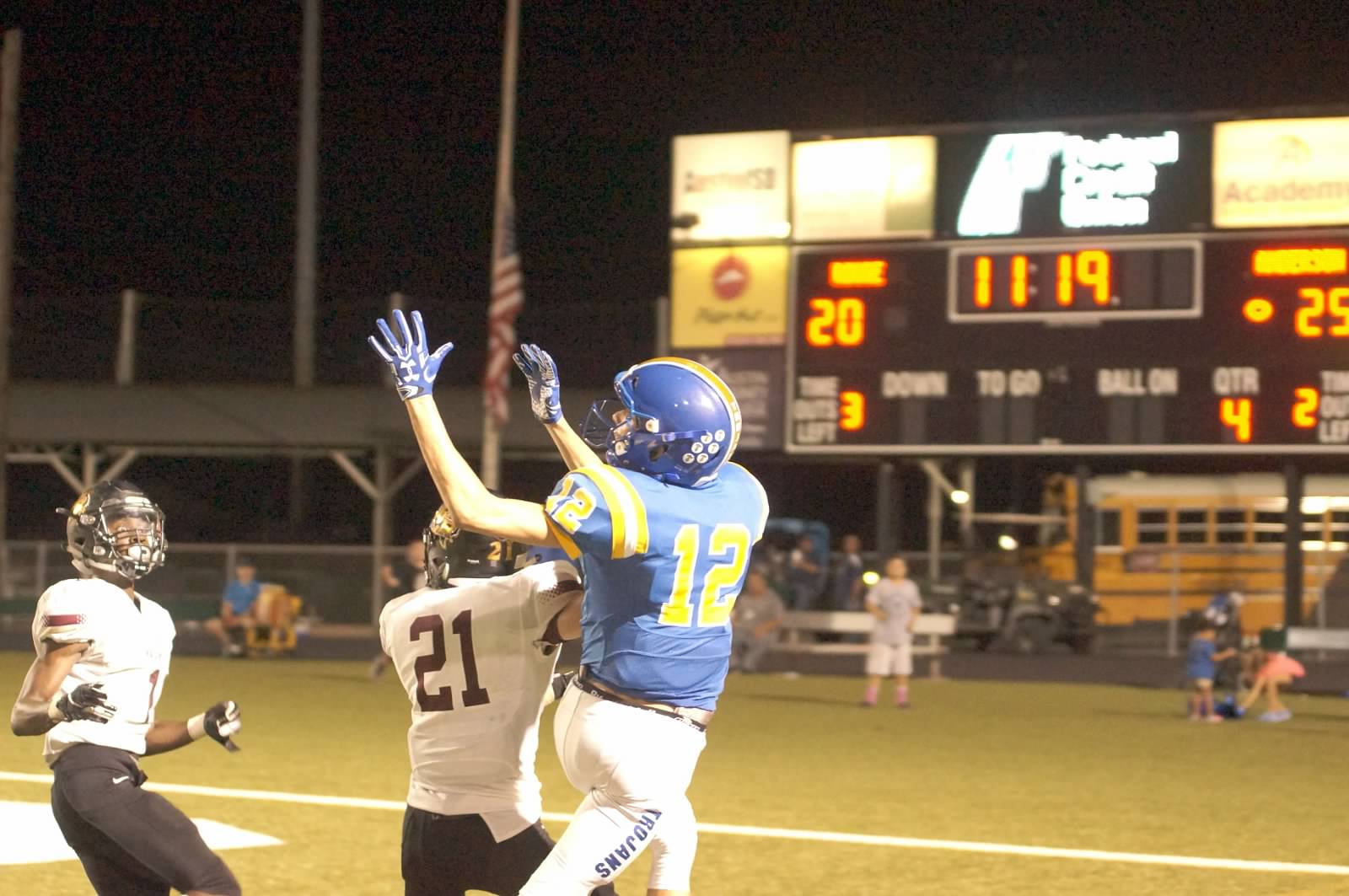 Now on the 5 yard line, the Trojans capped the long drive with a five yard run. The two point attempt was marred by two penalties that took Anderson three snaps to finish, they came away empty handed, but up by 5.

There was lots of game left, the clock showed over eleven minutes, the defense forced three and out. A series of back and fourth found Rouse with first down and the ball on their own 25. 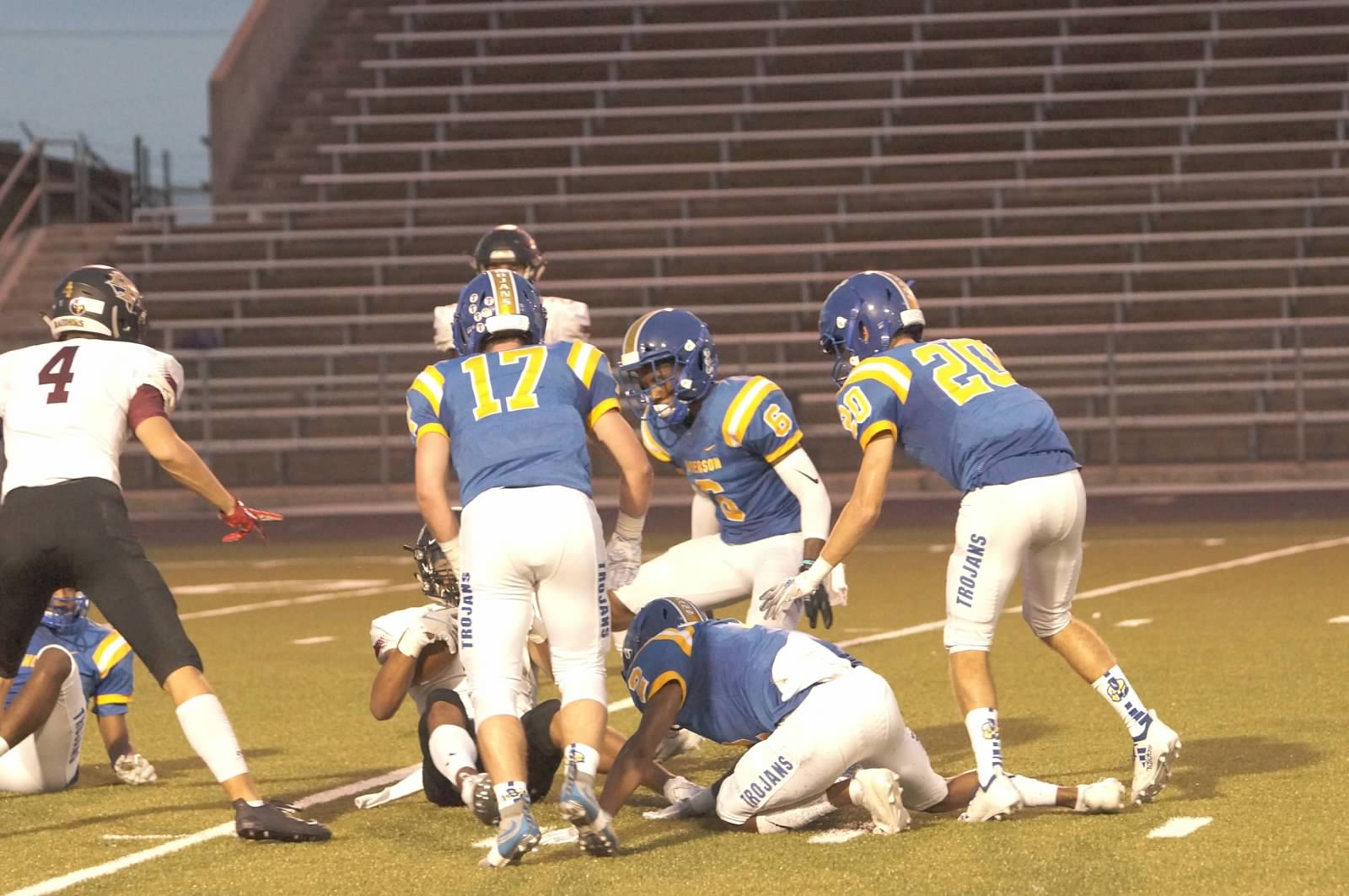 The Raiders started a long march with a quick 20 yard run, and though the defense got close to forcing them out, they moved across the thirty yard line, and the clock ticked into that time when you start playing scenarios over in your mind.

Rouse entered into the red zone with a first down on the eighteen yard line. Three snaps later the game seemed to converge to a single play, with Rouse at 4th and four at the 11 yard line, with less than two minutes left. 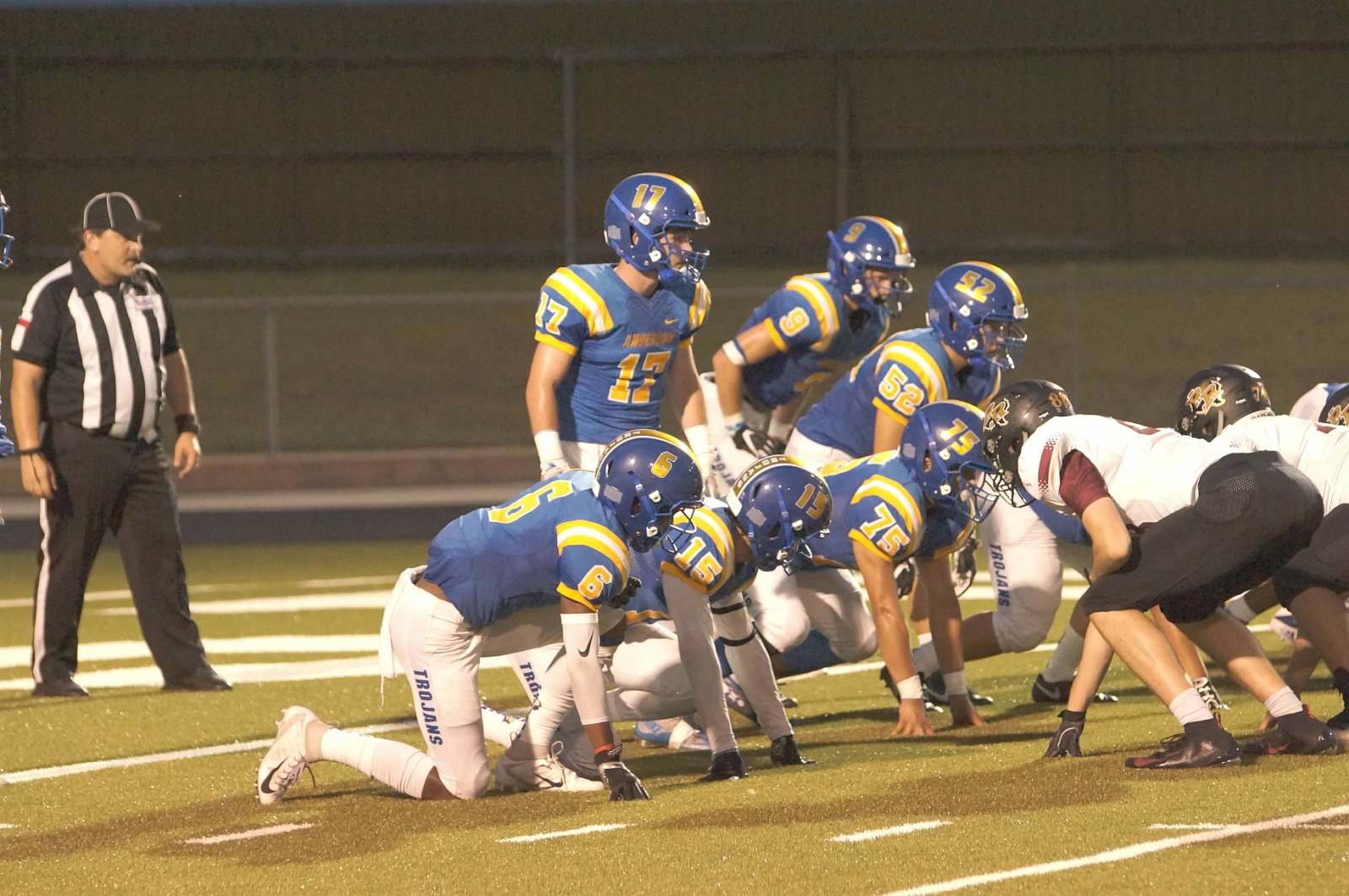 The rumbling Rouse Raiders, were on a drive that featured their running back number 22, showing Emmitt Smith like stamina, the stage seemed to be set. The Anderson defense never gave up, with a beautiful open field tackle stopping the run for first down from becoming a touchdown.

The Raiders were suddenly at first down on the eight yard line with somewhere near a minute sixteen left, looking unstoppable, having chewed up lots of small yards and converting third and fourth downs. It looked like curtains for Anderson.

Boom, four yards and Rouse was on the four, but the Trojan defense was in it to win it, not having allowed any long runs, juking moves, slants or anything else other than first play on this drive. It was all short gains against Anderson on this long punishing fourth quarter defensive effort.

Second and goal at the four, in the second game this season, the team was playing a close, back and fourth game, in it to the last. Keeping their composure. Rouse false started.

About twelve seconds left, fans on the edge, the secondary forced a throw out of the end zone, and Rouse blinked again, ineligible man downfield.

The last play of the game, the Trojan secondary forced a coverage sack, with no one to throw too, the Anderson lineback corps shut down the run option and ran down the quarterback, tackling him for the win.