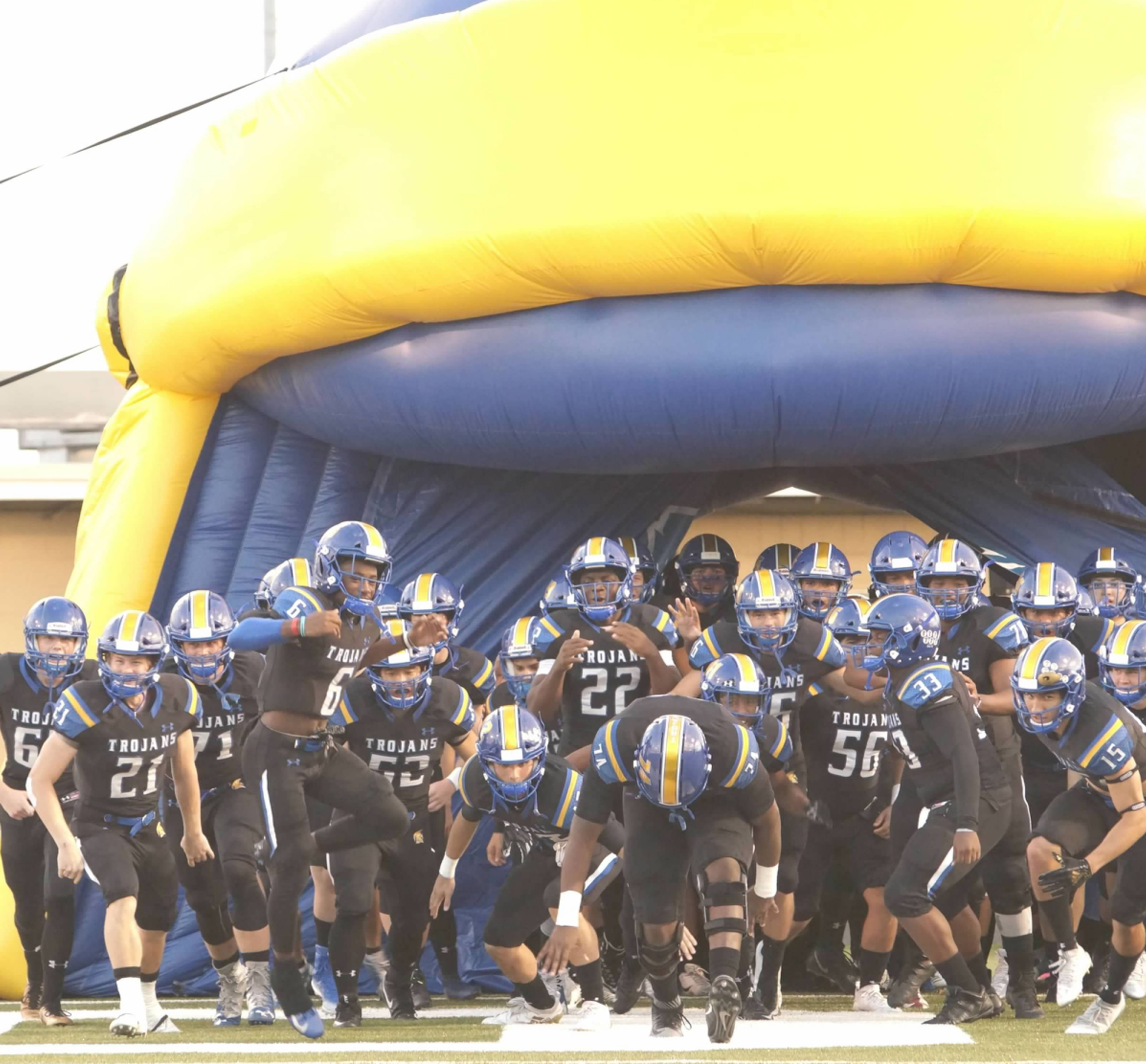 Summary
The Anderson Trojans started the week off early against the Del Valle Cardinals at Nelson Field on Thursday the 12th playing a close game into the last few minutes of the fourth quarter. The crowd was treated to a win that set the stadium alight, with a final score of 30 – 14.

The new Anderson Trojan helmet introduced the team onto the field in windy conditions. Both teams featuring strong running game offenses. Del Valle started the game with the ball and methodically moved down the field with rushes and one short pass. Their first score was a break out run of forty five yards, the running back starting with a move to the right and outrunning the defense down the sideline. 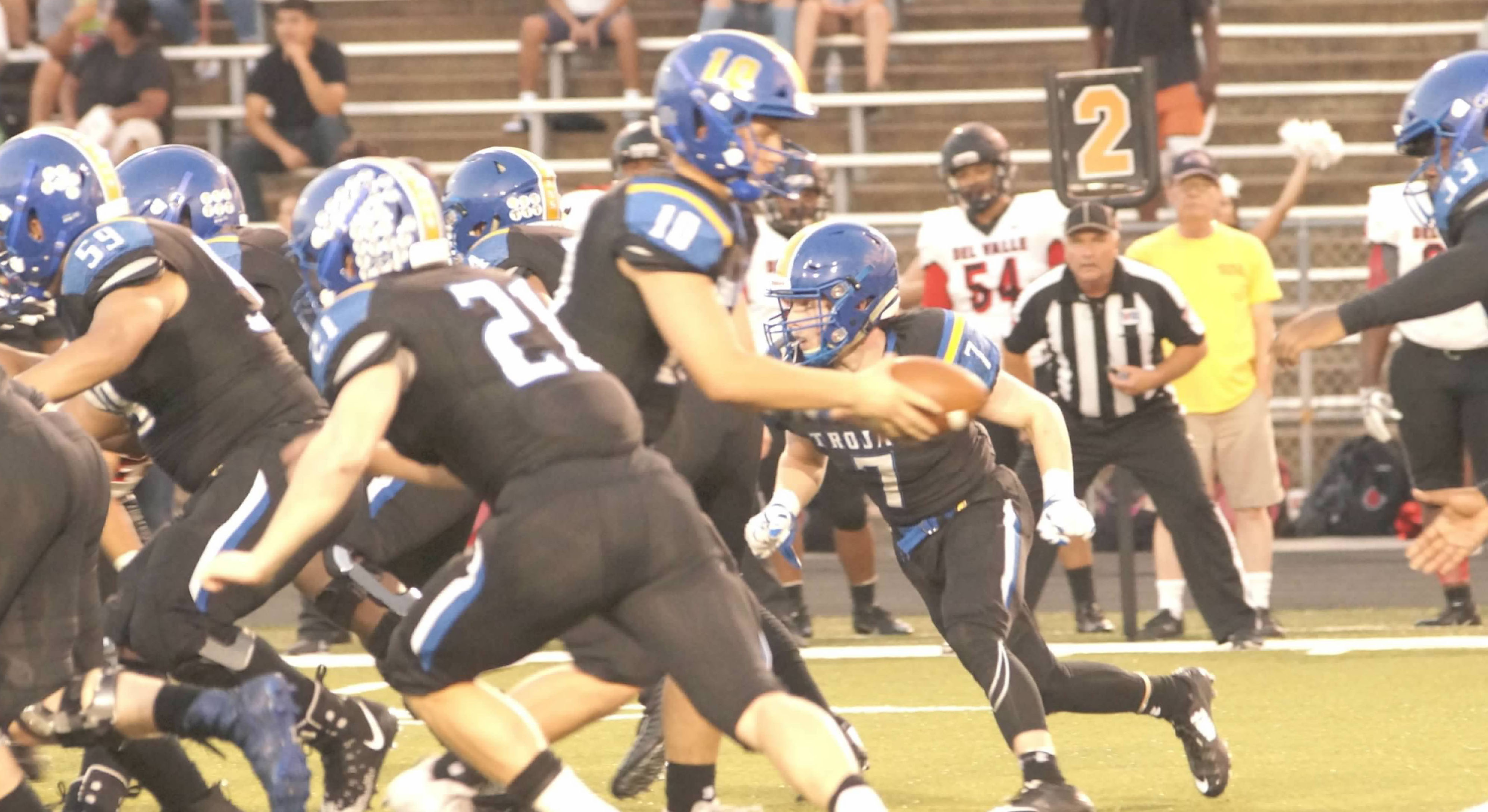 Anderson answered with a series of runs, using the clock and picking up good yards every down, breaking a few ten-plus yard runs. Once into scoring range a one two punch of a left sweep for ten plus yards and then a run up the middle for the touchdown highlighted the team effort in blocking from the line and the receivers.

The defense showed their mettle by holding off the next Del Valle drive, into the second quarter, by forcing the Cardinals to unsuccessfully attempt at a fourth down conversion right on the edge of the Anderson twenty yard line. 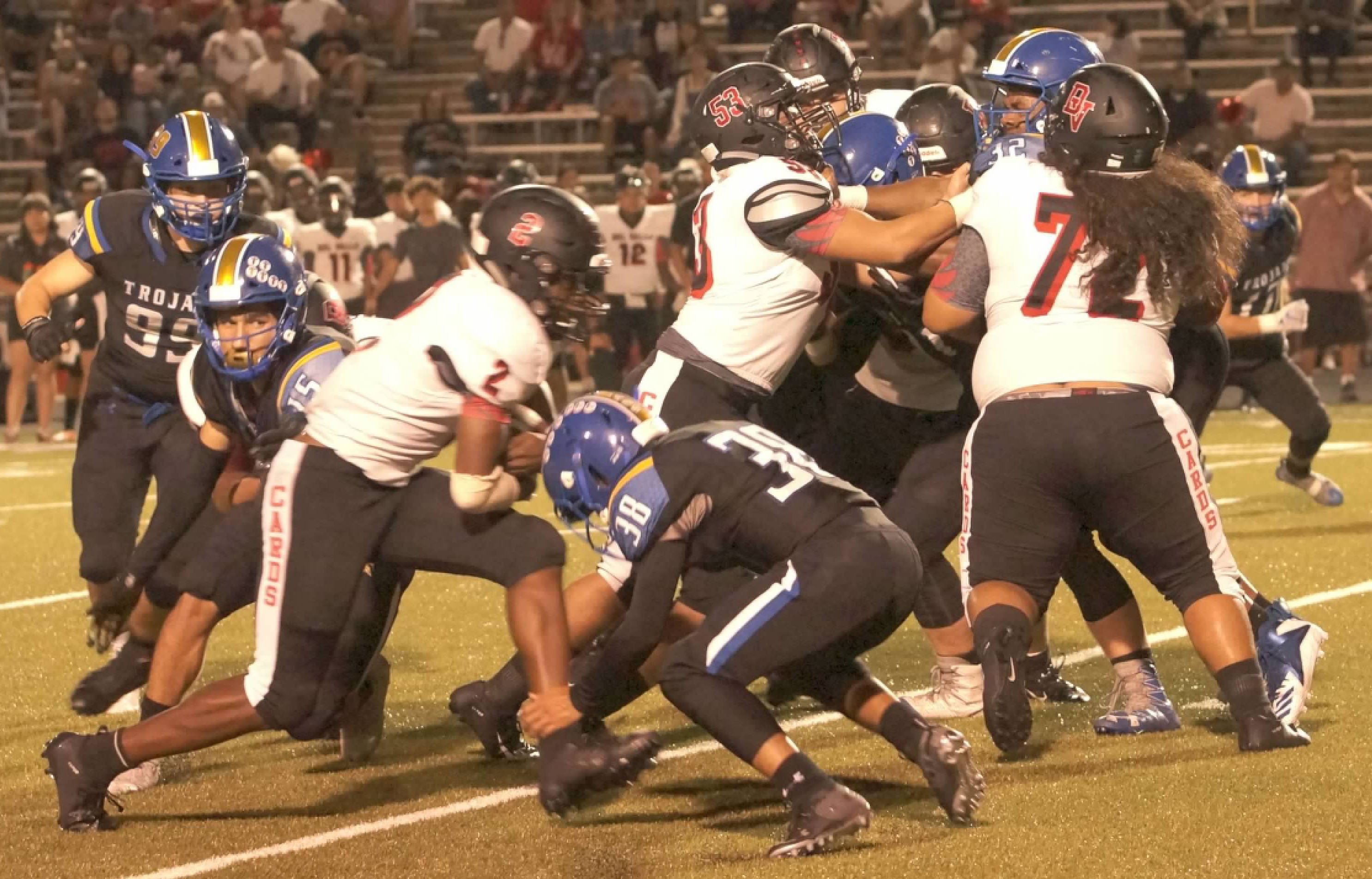 During the Cardinal drive the D-line was able to keep the Cardinals to short gains, and the secondary stopped the two longer runs. The one long pass attempt was broken up with tight coverage by the safety. Twice the run was kept to zero yards, which was especially satisfying for the cheering crowd on the fourth and two attempt to pick up the first by the Cardinals QB.

The next Anderson drive was a repeat of the first drive, with solid gains on the ground and a first down on the Del Valle twenty. A fumble turn over occurred when the Anderson full back was hit hard at the line multiple times moving from left to right against a storm of D-backs.

Continuing on a strong theme of defensive activity, the Cardinals were down to fourth and 21 at midfield. What an incredible opponent they are, taking a time out to think it over, going for it and pulling the defense into a very well timed, first use of a screen pass, to run for the first down to the 26 yard line.

Without much time to think, the Trojan Defense was gang tackling the Cardinals running back to stop another fourth down attempt, this time with a short two to go on the Anderson 15. The half ended with the Defense forcing three fourth downs in the half and keeping a strong opponent to seven points for the half.

Anderson opened the second half, driving down to the 26 yard line with a series of runs and stalling on a fourth down attempt. The Cardinals stunned the crowd with a huge sixty yard run and finished off a short series to go up by seven.

The Trojans did then not find much daylight, going three and out, including an incomplete pass, the first pass of the night. Down one score, with a resurgent Cardinals offense, the situation looked tenuous. The defense held the Cardinals, stopping them with one yard gains twice. Helped by multiple miscues by Del Valle, the Trojans forced a punt.

During that drive the secondary made an outstanding third down play on a sure pass by the Cardinals, showing depth at the corner position, where the Dell Valle team was picking on Anderson. A huge throw to the receiver, who had a head and a half height advantage, was blocked by the defender who was sticking like glue and jumping up high enough to disrupt the ball from its beautiful reception trajectory. The crowd was pumped. 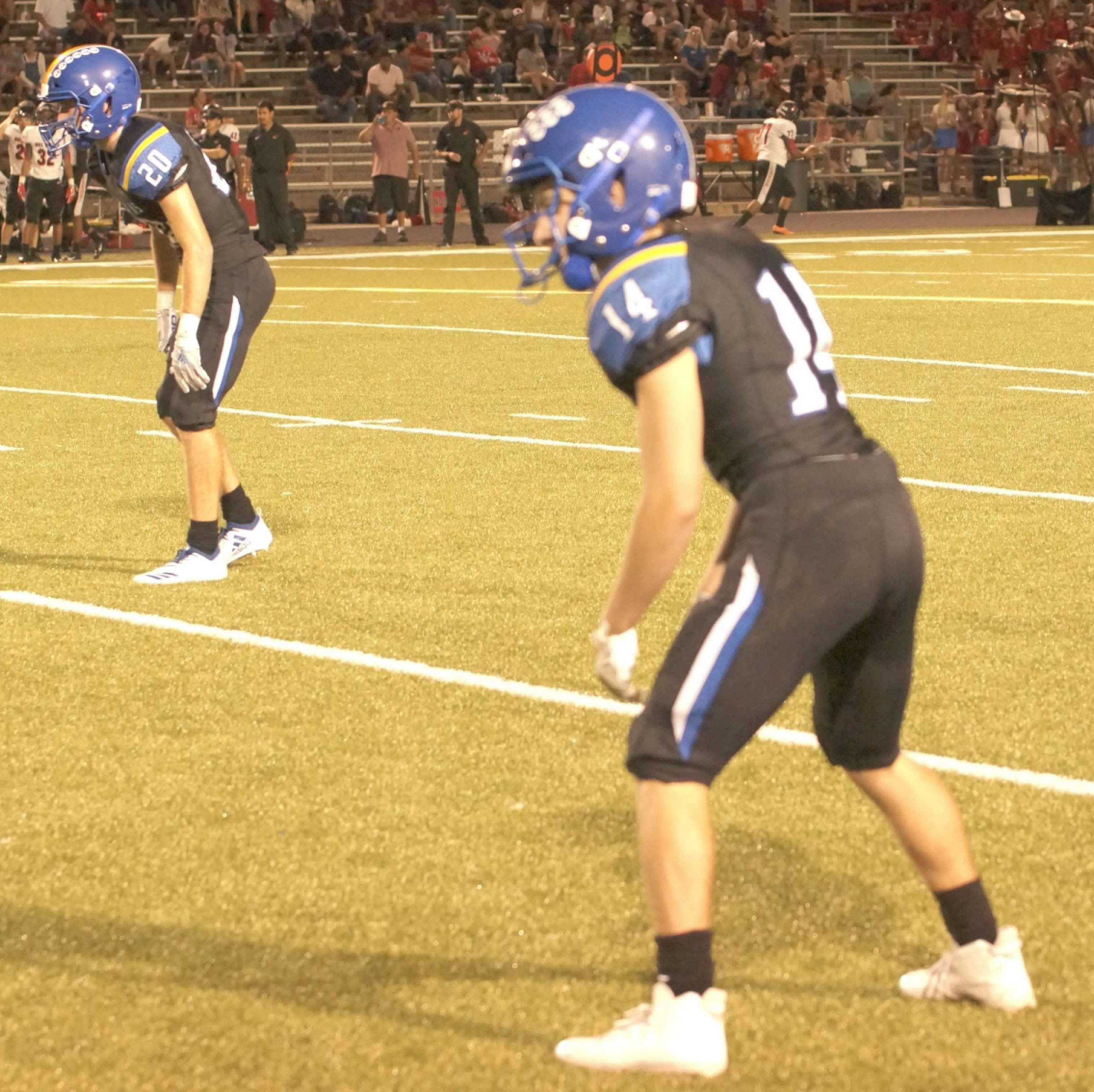 Special teams forced the fans into roaring ovation by blocking the punt and recovering the ball deep in the red zone. Yes, the same defender from the third down play was at the forefront of the blocking surge of the special teams line.

The Trojan offense was stopped by a staunch Cardinals run defense that held them to one yard. A solid kick put the game back into tight contention, putting points on the board, Anderson within 4. 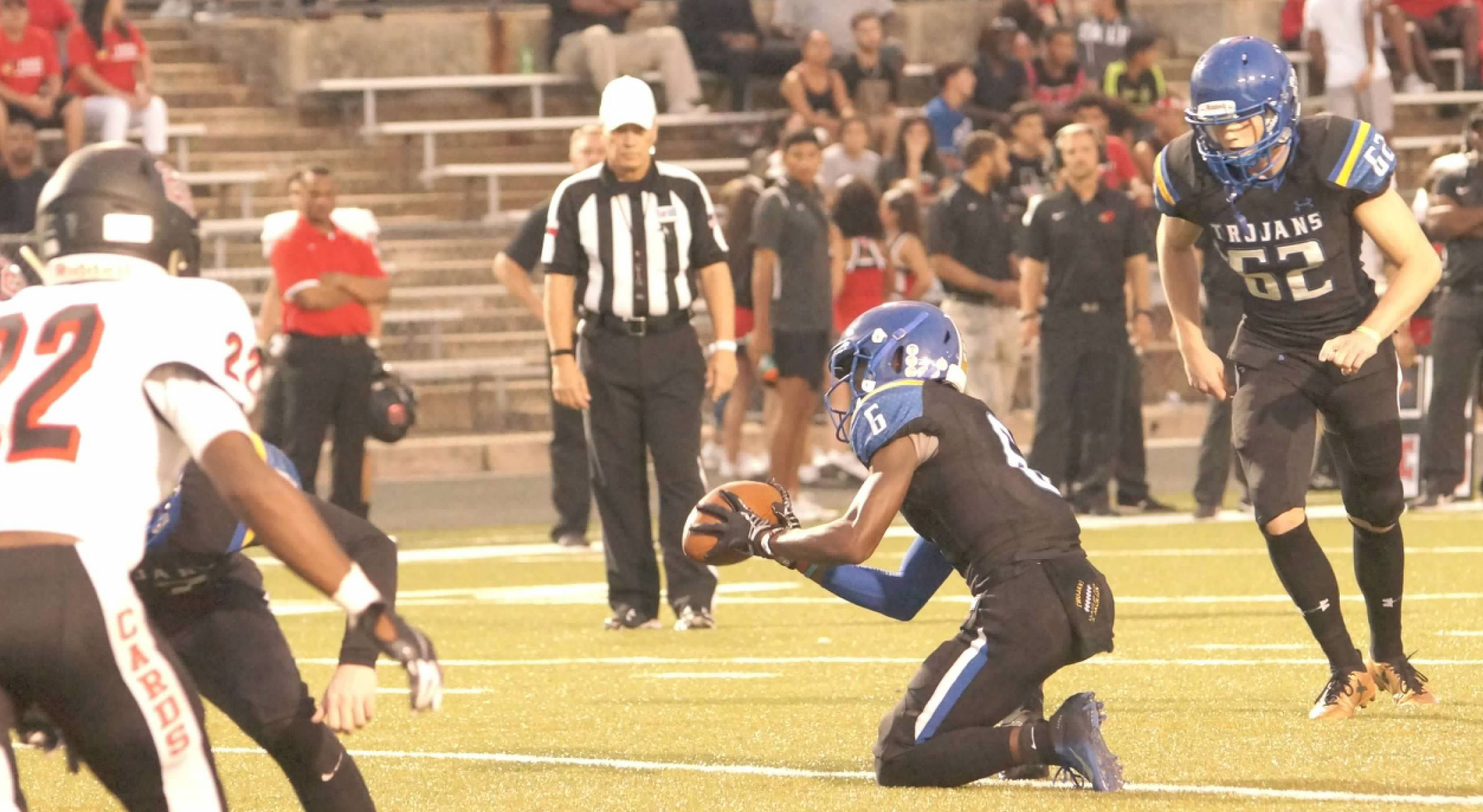 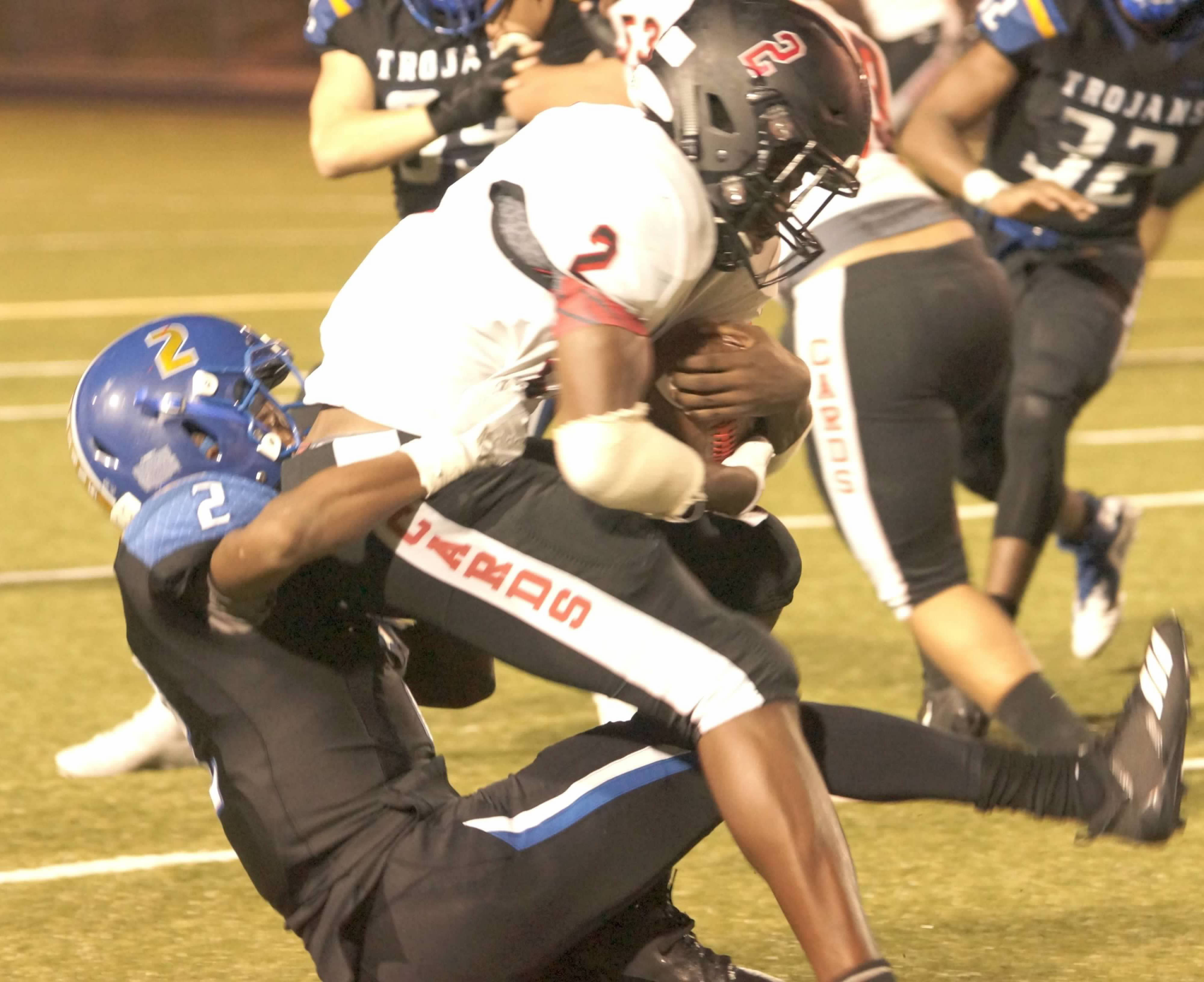 Del Valle started out the fourth quarter grinding out yards on the ground, seeming to be setting themselves up for a long, time consuming drive. After a couple of first down pick ups, the Anderson defense went on a tear, forcing a net loss of five yards in three downs, and forcing the punt, short of mid field, fourth and fourteen.

It’s hard to tell how many fans were thinking about it, but for the second time, on the second punt by Del Valle, the Trojan special teams unit plowed through the line and blocked the kick. Running in a crowd, with the ball bouncing around, bodies jumping for it, the Trojans recovered the ball. The atmosphere went electric, mid way through the fourth quarter, down by four, with the ball near the goal line, first down at the 26.

The offense shook off the three and out blues, and converted for first down in the red zone. For their second pass of the game Anderson struck. The quarterback faked the handoff and dropped straight back, with a defender untouched and heading right at him. The receiver went straight on the left side, splitting both safetys, moving into open field, five yards free of either defender. Backpedaling and watching the pass all the way, it was a sure catch of a well thrown ball for the lead. 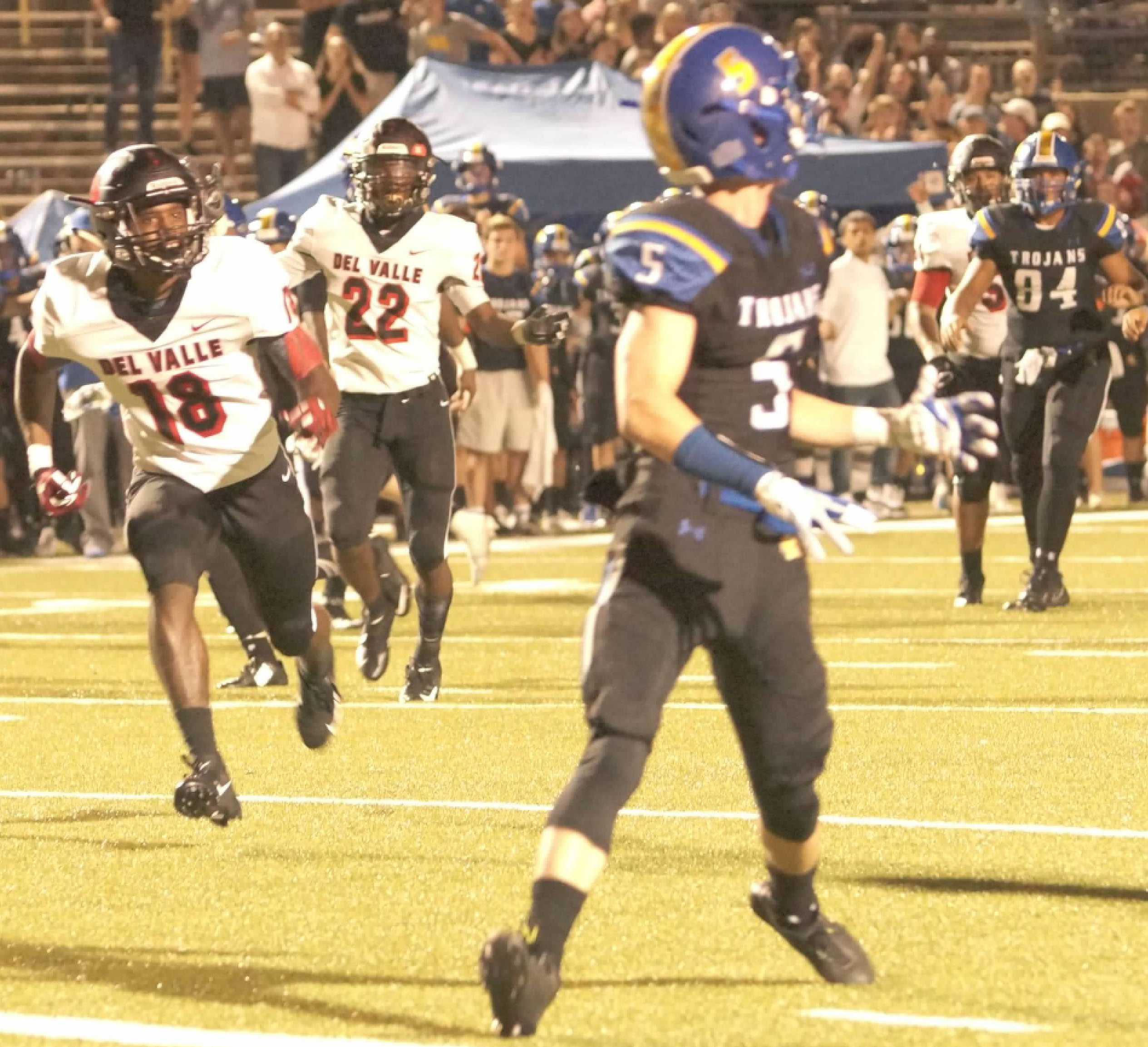 After three penalties between the teams, the extra point was no good, placing the game at a two point contest, which brought in the three point kicking game, with Del Valle set to receive and three minutes on the clock.

The crowd was off their feet and cheering like mad as the Anderson secondary was racing towards the end zone with a text book interception and touchdown.

The Cardinals had to decide the play on third and six, on the third play of their drive. The choice was throw, and the ball was right in the bread basket of the Trojan defender as he took a three steps running start to completely place his entire body in front of the receiver and continue forward towards the end zone. The exhilaration in Nelson field was fantastic, it was a moment to be remembered for the faithful and the greenhorns in the crowd. 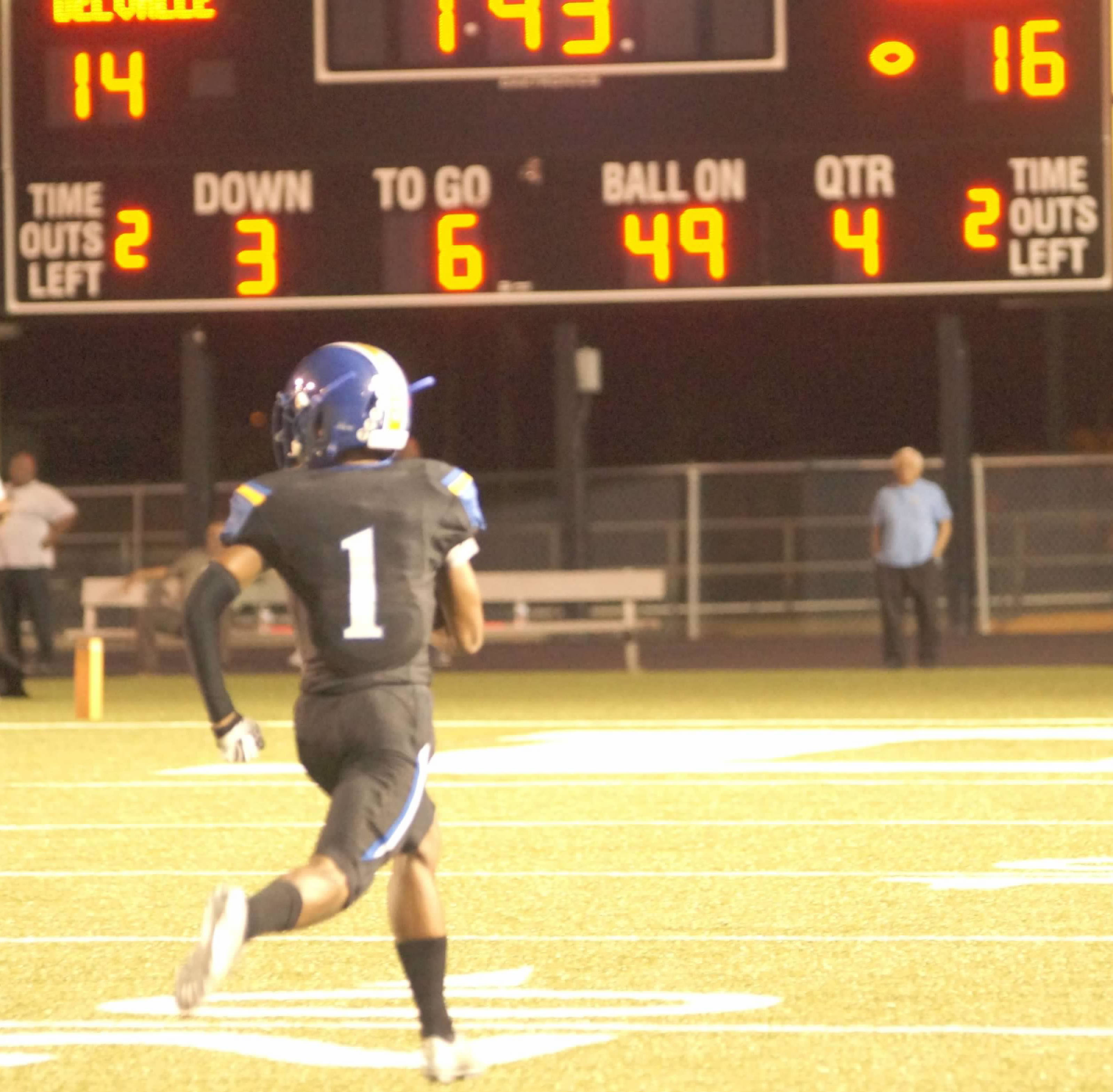 In the next series Anderson again picked off the pass to take possession on the five yard line. The offense scored easily. Showing their resolve as a high level opponent, Del Valle drove down the filed in their third possession during that last three minutes of the game. Anderson ended the game with a broken up pass in the corner of the end zone, in it to play to the end.