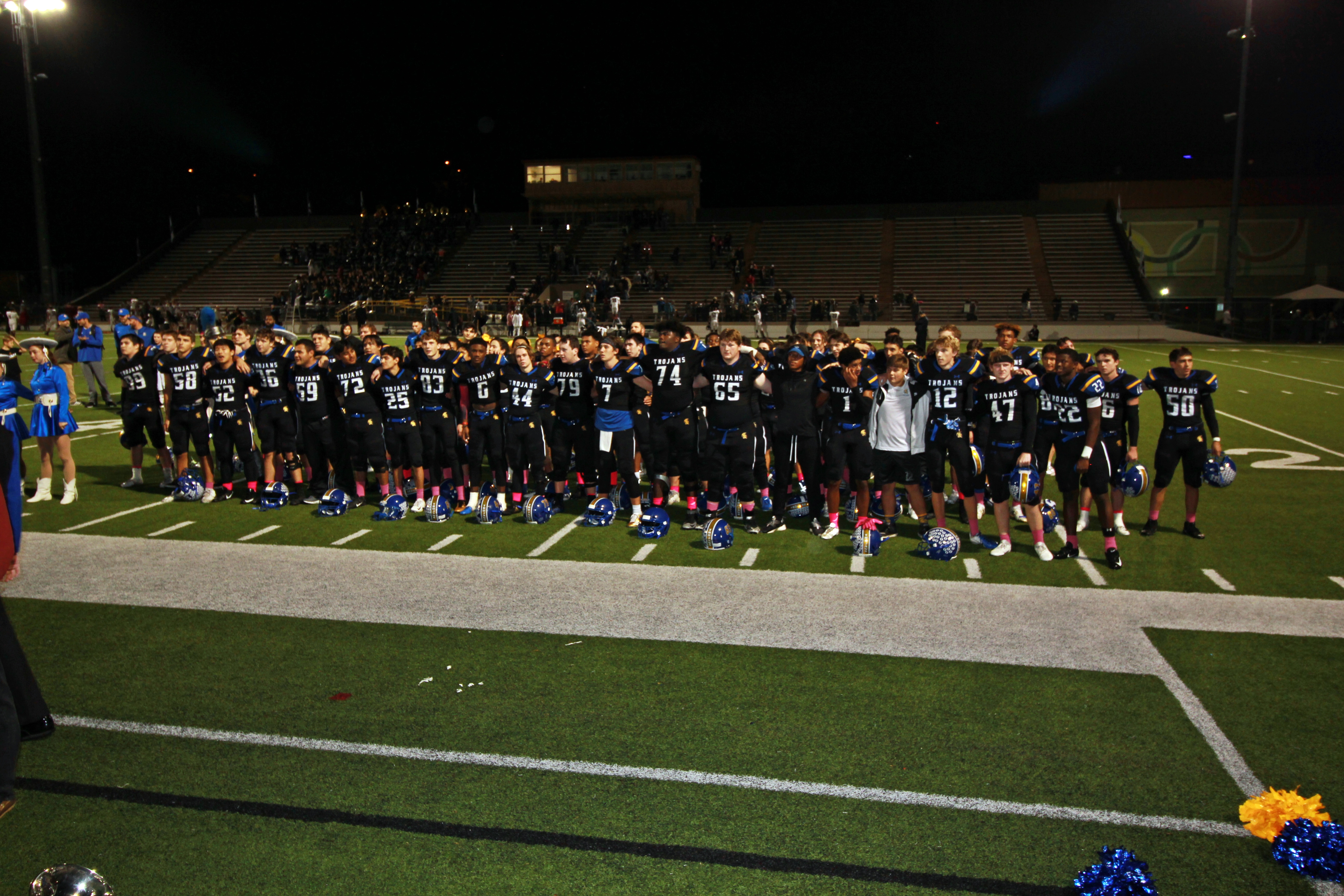 It was a dark and misty night when the Anderson Trojans took the field against the Austin High Maroons. The annual battle with Austin High is always hard fought, and this year, the game was also Anderson’s homecoming.

The game started off with Austin High driving down the field, looking to take an early lead. The defense, however, stopped the Maroons on a fourth and goal at the Anderson two-yard line. The Trojan offense took over and worked the ball up to mid-field. Then Anderson caught the Maroon defense flat-footed with a run out of the wildcat formation that resulted in a 50-yard touchdown.

Austin High took over on offense again after the ensuing kick-off. The Anderson defense again came up with a big, intercepting an Austin High pass. Much to the delight of the pom-pom waving homecoming crowd, Anderson took advantage of the turnover to put another touchdown on the board.

The Maroons, however, were not yet vanquished. They drove down the field to score a touchdown of their own, making the score 14-7. Austin High then took over on offense again after a perfectly executed onside kick. With time running out in the first half, they put the Trojan defense on its heels with a long pass deep into Trojan territory. The Trojan defense again stood firm and forced a turnover on downs. The first half ended with the score still 14-7.

Anderson started off with the ball in the second half. Their drive appeared to stall around mid-field, but the Trojans caught the Maroons off guard with a fake punt. The throw from the punter to the deep snapper gave Anderson the ball deep in Maroon territory. The Trojans took full advantage of the golden opportunity and put the ball in the end zone, extending their lead to 21-7.

The Anderson defense then forced a turnover, recovering an Austin fumble. Trojan offense again moved the ball effectively. This drive included a successful fourth-and-two pass. Austin High, however, stopped the Trojans deep in their own territory. Anderson didn’t come away empty handed, kicking a field goal and adding to their lead.

Austin High still didn’t give up. They drove the field and scored a touchdown, cutting into the Trojan lead. The third quarter quarter ended with the score 24-14.

Again, Austin High attempted an onside kick. This time, however, the kick only went five yards then bounced backwards. With an enthusiastic homecoming crowd cheering them on, the Trojan offense methodically took the ball down the field and into the end zone, taking several minutes off the clock.

The Maroons still had some fight left in them. They took the ball down the field, finishing the drive with a touchdown pass to their very tall receiver. Again, Anderson’s lead was at 10, with the score 31-21. With only three minutes left in the game, the Maroons again went with the onside kick. They recovered the ball, but had not allowed the ball to go the required ten yards.

The Trojan offense took over with a short field in front of a jubilant crowd sensing victory against a long-time rival. The Trojans put the game away with an electric run into the end zone, extending their lead to 37-21.

At last, an always tough Austin High team was vanquished by a determined Trojan team.

And the homecoming celebration was on!