The Anderson Trojan football team gave their fans a lot to cheer for during their game against the Manor Mustangs at Mustang Stadium on Friday the 13th. Contrary to a day associated with bad luck, there were no interceptions or fumbles by either team in a game that ended up with the Mustangs winning by a score of forty-two to seven.

Anderson played a determined and talented team, providing the fans with plenty of expectations for the next game in district play. They left you feeling that all the moving parts will continue to synchronize into results that will reflect the effort, sweat, and heart the players put into each play under the lights.

The Trojan defense went on a string of four stops, with three-and-out series for three of those stops. With cheering fans, a great first quarter sack brought back the sound of foot stomping thunder from the aluminum stands, a sack that was just one sign of an improved defensive effort for this season. 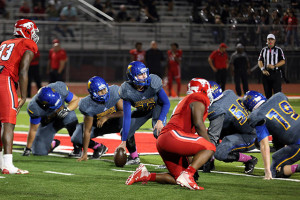 The Trojan offense moved the ball with various running plays, including a few new jumbo package looks from the offensive line, looks that Anderson fans have not seen this year. The offense was faced with a huge defensive line, the likes of which they had not seen since earlier in the year in non-district play. Although the line had their hands full, there were no sacks of the Trojan quarterback. Late in the first quarter the Trojan field goal attempt was blocked.

The punting team was strong with booming punts and very good punt coverage. At least three times during the first half the Mustangs were pinned deep by great punting and coverage, including a 59 yard punt leaving Manor inside their 5.

The first half defense included two great pass break ups, helping to keep Manor to an almost non-existent deep passing game. The play by the corners and safeties was complemented with improved defensive penetration into the Mustang backfield.

The second half started with the same intensity of the first half, with Anderson ripping off some long runs and protecting the quarterback. The Offensive line and the Quarterback continued to fight against an impressive defensive rush by the Mustangs. There was effective scrambling by the quarterback, getting off throws, and there were some determined runs with Anderson continuing to maintain the threat of breaking solid gains in the ground game.

The punt squad continued to wow the crowd. A muffed snap sent a groan through the Anderson stands, which turned into a thunder clap of feet stomping and cheers when the punter chased down the football, picked it up, and punted an impressive kick that was capped with a great bounce and more solid coverage by the punt squad. The crowd roared in appreciation of quick thinking and clutch performance. 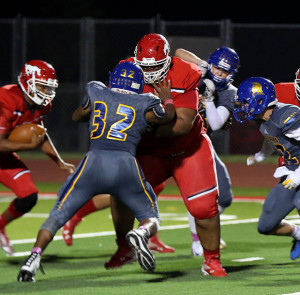 The defense showed continued execution and strength against a determined Manor offensive line that included a tackle the likes of which evoked memories of Refrigerator Perry, a player who could seal the edge of the line with great effectiveness. The secondary continued to knock down passes, including a long pass that would surely have gone for a TD if it had not been knocked down. The Manor receiving core included players that looked more like linebackers, a hand full for the Anderson defense.

The fourth quarter play showed increased intensity, and there were several hard hits to the Trojan receivers and the quarterback. Both teams continued to play in fierce competition, the desire to compete regardless of the overall situation. 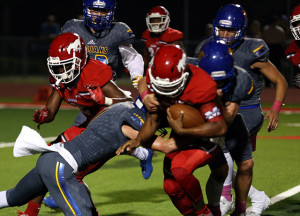 The defense contained the Mustang first string and starting quarterback to a single score in the last quarter of the game. With all the pass knock downs by the Trojan secondary, it was a big surprise when a deflection by the defense became a lucky catch by Manor for a long gain.

The fourth quarter score by Anderson highlighted the dogged determination shown by the entire team throughout the game. After overcoming some small penalties in a drive that started in the third quarter, Anderson was faced with opening the fourth quarter with third and about five. 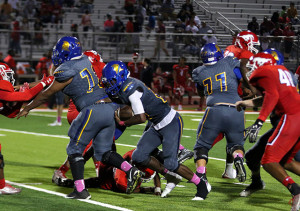 The entire line blocked to the right and the hand-off play was a misdirection to the left, and a shiver move between the defenders by the running back resulted in clearing the first down marker by three yards.

The scoring thirty yard pass play started with the quarterback eyeing a receiver cutting across the middle of the field with the defender trailing. A rushing D-Lineman forced the quarterback to scramble right, then curling left, where the defender slipped. Keeping his eyes open, and with a receiving group that continued their routes, and an O-Line keeping all other defenders out of the backfield, Anderson scored with a long, cross field throw, to a second option receiver cutting from the middle of the field to the left pylon at the front corner of the end zone. 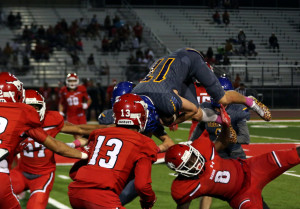 The ensuing on side kickoff was recovered by Anderson in spectacular fashion in a textbook on sides kick. The ball spun and bounced at about eight yards, sending it up into the air amid a crowd of defenders and Trojans. A leaping catch by Anderson secured the ball in the air, where the receiving player was hit and flipped, coming down on top of players, with the ball secured in his hands. Anderson ball.