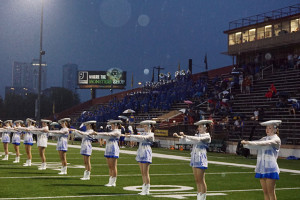 2017 Pre-District play ended on Thursday night when the Anderson Trojans faced the Liberty Hill Panthers at House Park. There was a steady downpour for the game, which was, oddly, the team’s last game at House Park for this season.

A spark was lit by the Trojan defense on Thursday night inspite of injuries amongst the starters. The defense kept the score tight by forcing 5 fumbles and stopping several Panther drives. The hard work was shared by all of the defensive players with critical open field tackles by Bryant Shamiya, Andre Jackson and Kyle Brown. Kyle Brown led the defense in tackles but had company in Kameron Langford, Andre Jackson, Jackson Green, JohnMark Radle and Nathaniel Velez.

Special teams protected the ball in the wet conditions. Ben Caven was successful at booting the ball into the end zone to avoid the Panther’s returns. Dean Dixon and Cameron Turner held tight to the ball on the Trojan’s returns. 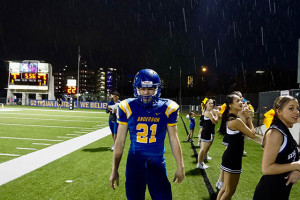 On the offensive side of the ball, Coy Fullmer was the go-to option in the wet weather. The opening drive saw some excellent blocking by the offensive team giving Coy 90 yards of open field for a quick 6. Allowing only one sack, the offensive line held strong giving Senior quarter-back Davis Adams time to see the field and maneuver. The coaches were gutsy going on 4th down successfully several times 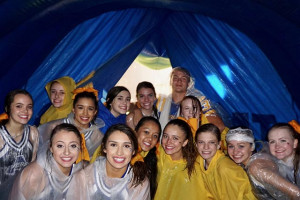 The Trojans have an off-week then district play begins with an away game against the Manor Mustangs. Come take a trip to the country to enjoy some Friday Night Fever. The team is playing hard and playing well. The band’s Luminosity performance is stunningly artistic. The Belles are impressive as usual in their choreography and our new cheer squad director has put a lot of pep in the dynamic Trojan cheer squad.